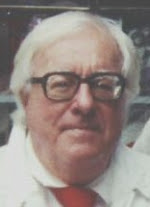 I discovered Ray Bradbury in a trash can. On my way home from grammar school, I saw that someone had discarded some yellowed, worn 1970s paperbacks. I salvaged all the true ghost stories and horror fiction anthologies. One Berkeley paperback contained Bradbury's "The Small Assassin," the tale of a mentally mature infant who plots his mother's murder. (Think of The Family Guy's Stewie.)

People forget that Bradbury, known for his science fiction, was also a horror writer. With "The Small Assassin," I became a lifelong Bradbury fan, whatever his story's genre.

I first met Bradbury in 1992, at a Malibu, California book-signing. (His, not mine). He loved my trash can story. One would expect the author of Fahrenheit 451 to rejoice at people rescuing any books from landfills, incinerators, or recyclers.

Read the rest of the article in the Hollywood Investigator.