If you love ghostly horror stories about haunted children -- like The Sixth Sense! -- you'll want to see Within, premiering on the Lifetime network on Saturday, July 31st, 9 p.m. EST. It will also air on Sunday, Aug 15th, 7 p.m. EST, and Friday, Aug 20th, 9 p.m. EST.

In Within, nine-year-old Rachel Weiss sees the evil spirits that reside within others and compel their "hosts" to do very bad things. When her new friend Michelle's schoolyard pranks turn from petty theft to life-threatening attacks on other children, Rachel's visions may be the key to stopping the violence -- and solving the mystery of a young boy's decade-old disappearance.

"Within is a slow turning screw of Horror, with each new scene slowly and surely stepping up the skin crawl factor. You might just find yourself a little bit paranoid around your child's new friend after this one." -- E.C. McMullen Jr, Feoamante.com

"...Within is never dull. Its well-paced story holds our interest, and even manages to surprise despite its familiar conceit. The fate of 'bad seed' Michelle is also unexpected; a surprisingly dark ending that may discomfort Hollywood studio executives who are always trying to up the 'feel good' factor in films." -- Thomas M. Sipos, Hollywood Investigator

"...I get back to the fest for Within, the winner of 'Outstanding Feature Film,' and rightfully so. Written by Rebecca Sonnenshine (The Haunting of Molly Hartley, American Zombie)and directed by Hanelle M. Culpepper,Within features two of the best child performances I've seen in ages by Sammi Hanratty (Young Chuck on Pushing Daisies" and Mia Ford. --Sean Abley, Fangoria.com
Posted by Thomas at 10:53 PM No comments: 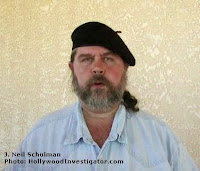 J. Neil Schulman has changed his mind. He now believes that David Landsberg did not copy Schulman's film.