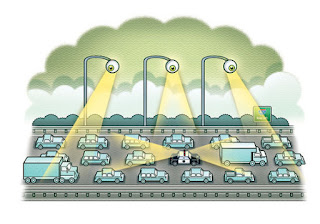 Big Brother is watching wherever you drive -- using a vast computerized network that tracks license plates on streets and highways!

Using a vast and automatic electronic tracking system that is all but unknown to the California public, on the day of Robles' murder, police in Los Angeles County cities had made a detailed record of the alleged getaway vehicle's movements.

The information came complete with GPS coordinates — even photographs.

In a situation evoking the hit movie Minority Report, the suspects were being watched even before they were considered suspects.

L.A. Weekly has learned that more than two dozen law enforcement agencies in Los Angeles County are using hundreds of these "automatic license plate recognition" devices (LPRs) — units about the size of a paperback book, usually mounted atop police cruisers — to devour data on every car that catches their electronic eye.

The L.A. County Sheriff's Department and the Los Angeles Police Department are two of the biggest gatherers of automatic license plate recognition information. Local police agencies have logged more than 160 million data points — a massive database of the movements of millions of drivers in Southern California.

Each data point represents a car and its exact whereabouts at a given time. Police have already conducted, on average, some 22 scans for every one of the 7,014,131 vehicles registered in L.A. County. Because it's random, some cars are scanned numerous times, others never.