Is Up in the Air Offensive to Asians?

Films have long been "edited for television," at least for broadcast TV. It's also common for airlines to edit (some would say, censor) the films they screen on planes.

That's natural. Passengers on a flight are a captive audience. They chose to fly, not to see a film. Nor can they change the channel. Besides, many flights carry children, which means no R rated films. 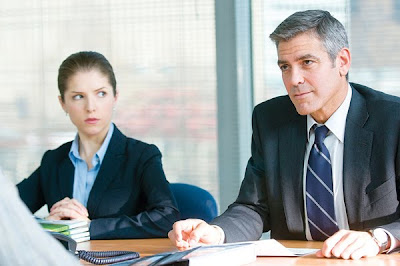 It's the scene in which Ryan Bingham (George Clooney) lectures to Natalie Keener (Anna Kendrick) about how to pick the quickest, fastest moving security line.

Ryan sees old people on one line, and passes. "Too much metal" in their bodies sets off the metal detector.

Then Ryan passes on a line with children. "I've yet to see a stroller folded in under twenty minutes" he says. 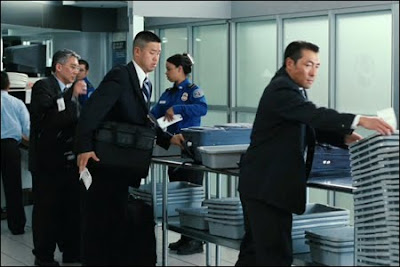 Then he sees Asians on a line, and says, "Bingo. Asians. They pack light, travel efficiently and have a thing for slip-on shoes. God love 'em."

Ryan says, "I'm like my mother. I stereotype. It's faster."

A funny line in an overall great film.

However, in the American Airlines version, the word "Asians" was replaced with "business people." (Not "businessmen" -- that would be sexist.)

This makes Natalie's "That's racist" reply nonsensical -- which is why her line was removed. Her lips move, but emit no sounds. Of course, passengers who could lip read knew what she said.

I think "business people" was spoken by actor George Clooney. It sounded like him, and it's common for actors to dub different versions of as film.

If you only saw Up in the Air on American Airlines, now you know why the joke fell flat. A line that flirts with political incorrectness is usually funnier than the polite choice.