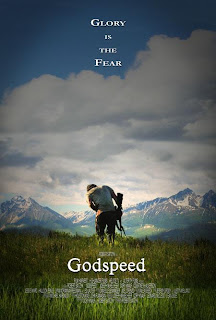 Robert Saitzyk's Godspeed premiered to critical acclaim at a number of film festivals and won the Special Jury Award for Exceptional Artistic Achievement at the CineVegas Film Festival.

Charlie Shepard (Joseph McKelheer, The Hamiltons, The Violent Kind) is a modern day faith healer, a man who claims that if you let go and believe, then his power to heal is very real. Living with his young son and wife, Charlie ekes out a meager living from his "healing" sessions in a small Alaskan town. With his marriage failing, and an old drinking habit coming back to haunt him, his family is brutally murdered by unknown assailants.

It's here on Charlie's journey to Sarah's remote home, buried deep in the Alaskan wilderness, where he must eventually confront Sarah’s troubled brother Luke (Cory Knauf, The Violent Kind, The Hamiltons) -- a dark journey that will ultimately reveal the truth of his family's killings and lead to tragic, violent consequences for all.

Shot in and around Anchorage and Wasilla, Alaska,  Godspeed was directed and edited by Robert Saitzyk and produced by Houston King and John Flanagan. Saitzyk’s previous films include After the Flood and White of Winter, which premiered at the 2003 Sundance Film Festival.

"Godspeed is a truly marvelous film…It’s an indie masterpiece, angry yet breathtaking cinema with a one-fingered salute to authoritarian moviemaking. Godspeed…is one of the finest movies in a long time." – Fangoria

"Director Robert Saitzyk somehow manages the impossible and completely sidesteps the usual traps inherent in such Old Testamental material...with a powerful combination of grace and fury." – Marc Savlov, The Austin Chronicle
Posted by Thomas at 1:01 AM