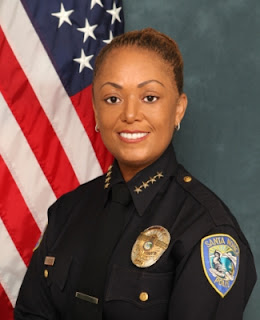 The City of Santa Monica, California, continues to earn its reputation as one of the most liberal cities in the United States.

In a recent press release, the Santa Monica Police Department (Jacqueline A. Seabrooks, Chief, right), announced that it will refuse to cooperate with ICE in enforcing federal immigration laws.

According to the release:

The Santa Monica Police Department (SMPD) recognizes the heightened concerns of our community during this time of uncertainty due to the federal administration’s aggressive approach to immigration enforcement. SMPD is committed to aligning our work efforts with the City’s resolution to embrace diversity and reject hate. In furtherance of this commitment, we are evaluating our internal processes and procedures to ensure we are meeting our professional obligations to all.


As part of its commitment to maintaining public safety in our community, the Santa Monica Police Department collaborates and maintains partnerships with a substantial number of social service, faith-based, educational, and regional, state and federal law enforcement partners. Many of these collaborations are longstanding and the terms and conditions underlying these partnerships and their associated activities are captured in operational agreements or memoranda of understanding.

In response to community concerns, the need for organizational transparency, and the needs to reaffirm the Police Department's steadfast commitment to its longstanding policy against immigration enforcement while also ensuring consistency with the City's resolution, the City will terminate the existing agreement with ICE.

Moving forward, both the City and ICE will work towards terms of collaboration on criminal matters that are in line with the City's immigration policies. The Santa Monica Police Department is also reviewing all other existing and pending memoranda of understanding and operational agreements associated with the Police Department’s work with its external partners to ensure consistency with City policies.