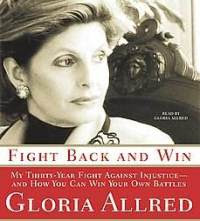 Feminist attorney Gloria Allred is in the news again, this time for representing Sharon Bialek, one of Herman Cain's accusers.

Allred has made a career out of badgering (only) men accused of sexual harassment, adultery, and even pedophilia, such as Michael Jackson. But few people remember that Allred herself once celebrated pedophilia, however inadvertently.

Years ago, Allred had a radio show on KABC-AM. Her bumper music was "Gloria," written by Van Morrison, and best performed by Jim Morrison of The Doors.

Listen to some of the lyrics, either as performed by Jim Morrison:

Or read some key excerpts here:

Come on baby
Here she is in my room, oh boy
Hey what's your name?
How old are you?
Where'd you go to school?...

Well, now that we know each other a little bit better,
Why don't you come over here
Make me feel all right!...

You were my queen and I was your fool,
Riding home after school.
You took me home
To your house.
Your father's at work,
Your mama's out shopping around.
Check me into your room.
Show me your thing.
Why'd you do it baby?

And so on. It actually gets more explicit -- and the above excerpts clearly indicate that the hero of the song is a pedophile.

I'm assuming Allred never paid attention to the lyrics, and simply used the song (or allowed its use) because it was about a girl named Gloria. At some point, though (after the song had been used for months, if not years), someone must have pointed out the meaning of the lyrics to Allred, because without explanation, her radio show's bumper music was suddenly switched to another song called "Gloria," this one sung by Laura Branagan.

Ironic, that the uber-PC Allred would allow herself be guilty of such a faux pas.

Gloria was written by Van Morrison while he was in the group Them.

Jim Morrison rewrote the words to make them perverse.

If Feminist Gloria Allred used Van Morrison's lyrics, she was not celebrating pedophilia.

When I heard the Gloria Allred Show's theme song, it sounded like Jim Morrison singing it.