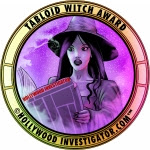 The Tabloid Witch Awards is a No Entry Fee horror film contest, sponsored by the Hollywood Investigator. Winners of the 2008 contest will be announced in October, and will receive promotion and trophies! Past winners also received in film screening in Santa Monica, California -- in the Los Angeles/Hollywood area!
Posted by Thomas at 2:44 PM