The Hollywood Investigator Is Now an Urban Fantasy Novel 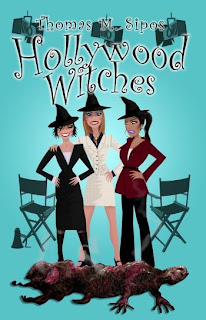 And so, surrounded by followers of Wicca, astrology, Native American shamans, telephone psychics, UFO prophets, a channeled warlord from Atlantis, and the alchemy of Hermes Trismegistus, Diana's coven of New Age witches hatch a plot to infiltrate and diversify the entertainment industry until Hollywood "looks like America" -- no matter how many eggs must be broken along the way.

Only the intrepid supermarket tabloid reporters of the Hollywood Investigator and Weekly Universe family of family publications can stop Diana's path toward world media domination.

Hollywood Witches is an urban fantasy/satire, available on both paper and on Amazon Kindle.
Posted by Thomas at 4:55 AM No comments:

Viscerea Ladies of Horror to Screen in Los Angeles, July 17, 2010 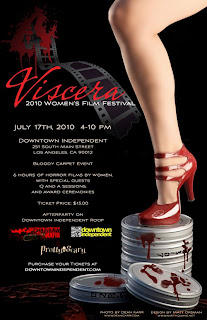 As a sponsor of the Viscera Film Festival, the Hollywood Investigator is pleased to announce the Viscera's premiere Los Angeles screening -- and an appeal for donations!

"Want to support women in horror? How about women horror filmmakers? Then donate today and become an official Sponsor of the Viscera 2010 Premiere!

What it means: Your donation of even $1 will help to pay the expenses of the theater, bloody carpet, backdrop, video/photography services, catering, and the organization of the Festival. We believe that women are truly coming together in one of the most difficult industries to break into today. Any donation will help to serve that purpose!

How to do it: Push the Paypal donation button and pay by Credit Card or Paypal account!

About the 2010 Viscera Festival:

The Chainsaw Mafia, Pretty-Scary.net, and the Downtown Independent are excited to announced the Viscera 2010 Film Festival Premiere, which will be a bloody carpet theater event on July 17th, 2010 in Los Angeles, California!

Twenty-eight short female-directed/produced horror films, from 30 seconds to 30 minutes, and from all over the world, will appear on the big screen for one night only! These films represent 3 years of films painstakingly curated by Shannon Lark of The Chainsaw Mafia and released on the Viscera DVD collections.

The Downtown Independent Theater features 222 stadium style seats within the theatre, along with a rooftop bar with a projection screen for those who don't want to miss the show.

Co-Directors Shannon Lark and Heidi Martinuzzi encourage both men, women, filmmakers, and all artists to attend the event in support of the ambition and drive of filmmakers who have stepped outside the traditional roles of women in horror films and taken on directing, writing, and producing their own independent projects. Several filmmakers will be present to walk the bloody carpet and accept their statues, followed by an after-party on the Downtown Independent rooftop until 2am.

Tickets are only $15.00 and available now online, with the carpet walk starting at 4 p.m. Show support for the event by joining Viscera's Facebook page, making a donation, and purchasing the newly released 2008-2009 Viscera DVD.

Also read the Hollywood Investigator's interview with Shannon Lark!
Posted by Thomas at 4:09 AM No comments: